This article was inspired by an excellent article in Linux Format (LXF 248, February 2019, P. 58) entitled “Remote sensors” or “Sharing data from remote sensors”. Essentially that mini-project used the Raspberry Pi in conjunction with a DHT11 temperature and humidity sensor to log data to a file stored on Dropbox. The project as described worked well but in my opinion had a few limitations:

With the above in mind, I decided to develop a system of my own that:

The output from my revised and extended system can be seen here (1 day’s data), or here (long term data, takes a while to load).

The diagram below shows the basic datalogger connection diagram. 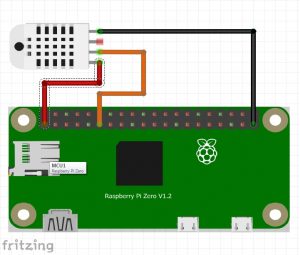 The original article used a DHT11 sensor. My project uses a DHT22 4 pin sensor which is slightly more accurate and worked with the exact same code as the original.

The (Python) Code for the Basic System

All the code in this project assumes that you are using a recent version of Raspbian. To install the necessary Python libraries, first make sure that you are up to date:
$ sudo apt-get update
$ sudo apt-get upgrade
Then install:
$ sudo pip3 install Adafruit DHT
$ sudo pip3 install dropbox
In order to use the dropbox facility it is necessary to set up a dropbox account, set up an app and get an access token. This can be obtained by going to your dropbox account and selecting developers –  www.dropbox.com/developers – the “Create your App” using the dropbox API, for access use “App Folder” and name your app, we will use “Pi log”. Create the app and go to the final screen where you will find you can generate an access token of the form “fU-2TIyyyfUBBBBBBBBCme2mCZpuu5GZZAVRm6soHH6fsYJ1CG6uyrvm-orxxe8Z”, make a note of this but make sure that you keep it secret – it is the key that opens the dropbox!

If you want to send email alert messages you need to install ssmtp and mailutils as well:
$ sudo apt-get install ssmtp
$ sudo apt-get install mailutils
You will need to edit the /etc/ssmtp/ssmtp.conf file to enter your own email details. An excellent ‘how to’ is here: https://raspberry-projects.com/pi/software_utilities/email/ssmtp-to-send-emails. Adjust the settings according to your email address, hostname etc. and test that it works using the command line as in the how to.

At this point you should test that all is well. Open a new file with your favourite python3 editor (I use idle3 as it allows you to test code as you develop it) and enter the following code:

To test the code, save the file as pithlog.py and open a terminal window and make the file executable:
$ chmod +x pithlog.py

and run the script:

You should see one line of output with the date, time and readings. Check your dropbox folder online to make sure that the data has arrived.
The final step in part 1 is to make the script run at regular intervals using cron. At a terminal prompt edit crontab:
$ crontab -e
and at the end of the file add the line:

Make sure that there is a newline at the end of the file. You may also optionally add this line before the one above if you want email notifications if there are errors, useful if dropbox does not work:


If you do not want to see any normal output, comment out any print statements used for debugging.


If you have successfully got this far Congratulations!

In the next part I will show how to POST the data to a remote site and display it in a chart. Coming soon.